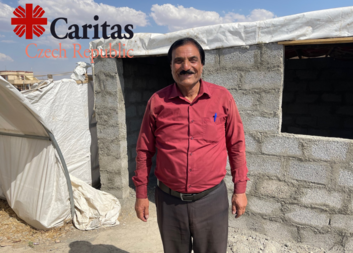 There is hope after years of homelessness for the displaced Iraqis

When ISIS seized control of several cities in central and northern Iraq in 2014, it prompted thousands of people to flee their homes. Seven years later, Iraqis continue to endure massive displacement and almost no possibility of returning home. With the closing of many in-camp IDPs, more than half a million are residing in critical conditions, without protection, security, or privacy. There are, however, stories of hope. Such as in the case of Rashid.

To feel at home

Several years ago, when Rashid and his family were forced to flee their home in Sinjar, he had to leave his house and agricultural land behind. They had to flee first from Sinjar to Syria and then they finally arrived in Sharya, Dohuk province in the Iraqi Kurdistan.

Rashid initially sought shelter from his relatives living in Sharya, and his family also received support from humanitarian organizations that provided blankets and other non-food items. However, their living conditions were still not ideal, and it was at that time when Rashid’s family received assistance from Caritas Czech Republic. They were offered to build a shelter in the Duhok province, and thus improve their living situation.

"This is the first time that I feel like at home," says Rashid. “I have a wife and a daughter who are disabled, and I am happy I can provide them with a safe and dignified life.”

"Our financial situation has been very critical," says Rashid. "I tried to improve my situation as a daily worker and by finding a place to build our shelter. I bought the necessary materials to have a roof over our heads. As a family of 9 (nine), thanks to Caritas, now I have another room to share with my big family."

Shelter support to hundreds of families

With support from the IHF, Caritas Czech Republic has helped hundreds of conflict-affected families like Rashid's in Duhok and Anbar with emergency and transitional shelter support.

We also provide income-generating opportunities to IDPs and host community members who receive training and daily wages to install upgrades with technical support and supervision.

"I have been working in Duhok for several years, and seeing the shelter improvement for IDPs motivates me even more," says Amin, shelter area coordinator in Caritas Czech Republic in Iraq.